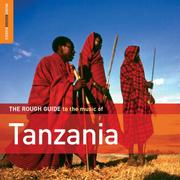 The Rough Guide to the Music of Tanzania CD

Download The Rough Guide to the Music of Tanzania CD

This CD, part of the Rough Guides series, is an excellent look into the music of Eastern Africa, namely the countries of Kenya and Tanzania. Its also one of the most accessable CDs of east African music available. It starts off with some engaging pop music from the grea Simba Wanyika, and contiues to get dancier and jazzier as the CD progesses.4/5(1). Rough Guide to the Music of Tanzania buy CD music Michael John LaChiusa's First Lady Suite is a fascinating probe into some of history's most neglected figures, the wives of U.S. presidents. The title is a wordplay on the familiar presidential suite, but also a reference to the three-part structure that focuses on Jackie Kennedy, Mamie. Enhanced compact disc. "This CD contains a data track that includes an interview with the compiler, relevant Rough Guide book content, a competition, and more"--Container. Program and biographical notes ([12] p.: col. ill.) inserted in container. Credits: Compiled by Werner Graebner. Performer(s): Various performers. Description. View credits, reviews, tracks and shop for the CD release of The Rough Guide To The Music Of Kenya & Tanzania on Discogs.

On Rough Guide to the Music of Tanzania, Karoli performs in a spare, acoustic setting. The disc includes the R&B (with local influence) of Dataz and the hip-hop of X Plastaz. What sticks in the mind for than anything else, however, are the bands like Ottu Jazz Band or the late Ndala Kasheba, whose string guitar powered his band on music.   If you aren’t familiar with East African music, I recommend purchasing this CD. The variety of music on is excellent and makes it a good album to start you collection with. A review copy of The Rough Guide to The Music of Kenya and Tanzania was provided by the publisher free of charge. Twenty-five years ago, World Music Network released its first compilation, the inaugural Rough Guide To World Music. A quarter of a century, and Rough Guides later, World Music Network founder, Creative Director and Head Selector Phil Stanton has thumbed through the archives to put together this special anniversary edition. This Rough Guide illuminates the fullest-fattest cream of West African music that has passed through the doors of Riverboat Records HQ over the last twenty-five years. Stretching some eighteen countries from Mauritania in the North to Congo in the South, West Africa is a place of many music's.